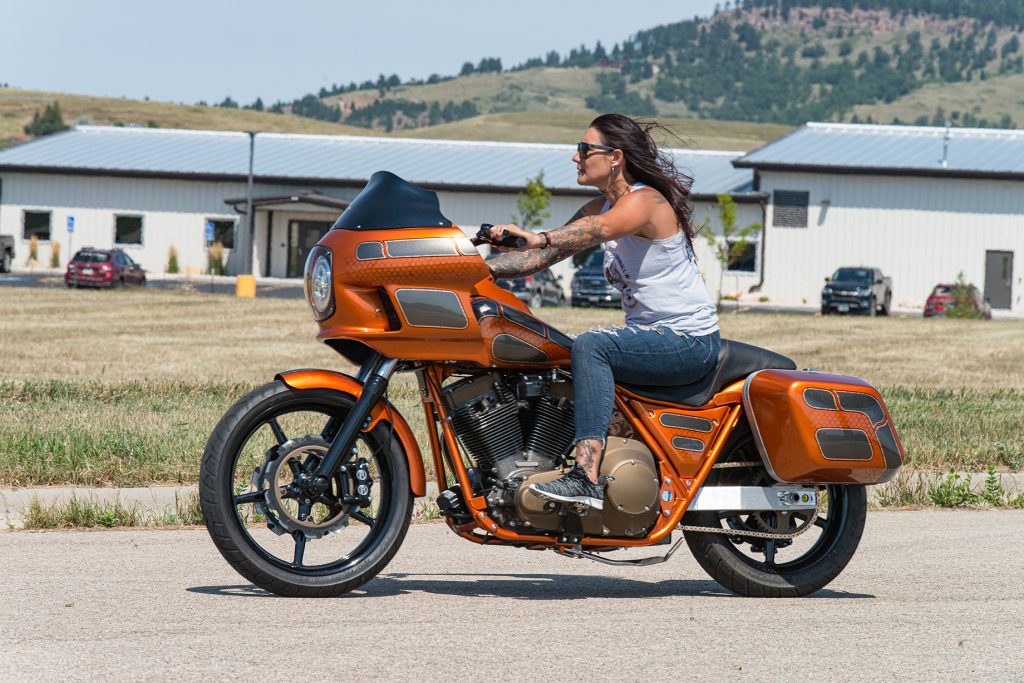 f there was such a thing as a “Mount Rushmore” of motorcycle builders Dave Perewitz would definitely be on it. His bikes and paint jobs are timeless exactly like an old rock song. When I hear Good Times, Bad Times I instantly transport back to my second-story bedroom in my Granny’s house on the corner of Inkster Road and Woodsfield when I was 13.

While there is no one “King” in the custom motorcycle world, there are certainly a few “Royal” families. The Perewitz’ are certainly counted among royalty in the Chopper world. Jody Perewitz is Dave’s daughter. Jody is a world-class painter, racer, and record holder. She currently holds 16 land speed records. Her first one was captured in Maine during testing when she recorded 164mph on a 100 cubic inch Procharged powered cycle.  She is also a Bonneville record holder.  She set the FIM world record of 207mph.

Jody’s bike on this month’s cover is one that she purchased after seeing it listed for sale [incorrectly] as a “Dyna.” There was a time when that happened often. Without knowing better, many people conflated Dynas for FXR’s when they first came out, mostly because the Dyna replaced the FXR in the factory lineup. Jody knew better and snatched the FXR Convertible up with no hesitation at all.

Jody rode the FXR in stock trim just long enough to talk herself out of the stock driveline and suspension. So she pulled it into the shop, removed the driveline to sell it, and removed the remainder of the parts to start her new project. That was six or seven years ago.

As often happens on the side of the counter that Jody and those of us employed in the motorcycle industry stand on, our projects tend to sit until we can either afford to finish it to our liking or until our customer’s bikes are done first.

Last year Ms. Perewitz was invited to act as Grand Marshall of the Sturgis Black Hills Motorcycle Classic for 2021. This is a tremendous honor, and Jody knew that in order to make the best showing, she needed something to ride that would honor this event in proper fashion. Since the FXR had been sitting for about six years, she and her father decided it was time to breathe life into the convertible.

The project started with a few items that Jody insisted on. She needed the bike to have a Twin Cam engine and genuine “RT” bags in the back end. The engine received the Dan Thayer “treatment” and was bored to a larger displacement. The stock Harley Davidson transmission internals are bulletproof enough to handle the torque and horsepower thrown at it. The Lyndall wheels are spun through the addition of a chain and sprocket rather than the stock belt drive. A chain is a bit more maintenance, but Jody is a racer at heart, so a broken belt was not something she intended to deal with, so the belt had to go.

Over the years, Jody’s father and Russ Wernimont have fostered a stellar working relationship, so both front fairing and fenders came from RWD. If a painter like Dave uses your body parts, I can’t think of a better endorsement. Arlen Ness supplied the side covers and Jody employed one of her new signature “Jody Perewitz 2-up” Mustang seats. The front suspension is 49mm, and the rear shocks are 14” long. The rear wheel swings on a Brocks Performance billet swingarm.

Jody and Dave are best friends, not just father and daughter. When I asked her if they butted heads during the project, she laughed. “DP likes the bikes to sit low…I want them up higher. He kept telling me that we needed shorter shocks.” She has learned a lot from her dad over the years and says that the most important thing that sticks in her head from her elder regarding her work is that “The best artists know how to hide their mistakes.”

Dave Perewitz is the “King Of Flames,” and while he has taught his daughter everything he knows,  she has a tendency to gravitate towards the sublime rather than the larger color palette that her famous dad prefers. Rather than offer “cheat codes,” DP has let Jody develop her own unique style. She has done that by repurposing the tricks and techniques that she has learned over the years and relying on new technology where applicable.

Jody spends her shop time in the paint booth rather than with a wrench in her hand. That said, Jody knows her way around the shop and gets her hands dirty plenty. While Jody is comfortable in the shop, her Zen is on the water. Jody is an avid boater and spends her free time, what little there is, on the ocean.

I asked Jody how she envisions the legacy of Perewitz Cycle Fab for the future. She said:

‘Perewitz Cycle Fab needs to stay the same size as it is now. We did BIG. It was too much stress on my dad. I want to keep it small…quality over quantity.”