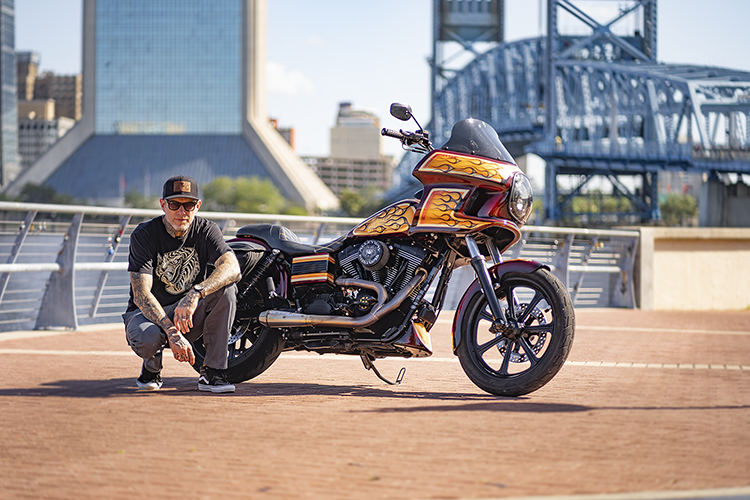 Some bikes are built for the exclusive purpose of riding, and some are built for show. This bike is a little of both. Oddly enough, this bike’s story starts with a completely different motorcycle altogether and my relationship with the original owner of the super glide.

In 2007 I was collecting parts to put together an FXR using an ‘83 chassis and 107 S&S sidewinder motor. Around this time, I met Jason Kenny, who approached me about painting a bike for him, this 2013 Superglide.

Jason proposed that we do some trading. He had an original deviant RT fairing, one of the first prototypes for Dynas that he swapped out for the second version. Having the old fairing as a bargaining chip, we struck a deal. Jason didn’t want to start on his paint for a while, but we had some ideas that we agreed upon, and he basically gave me the faring as a sign of friendship and good intention; knowing somewhere down the road when he got his finances right, we would do business

As things go, I finally got my FXR going and rode it for a little while. Then being a painter by trade, I decided to tear it down for paint since I didn’t have a “calling card“ at that time. Just before tear down, Jason contacted me saying life had changed and that he didn’t ride as much as he used to and asked if I knew anyone in the market because he was selling his bike. At the time, I didn’t, but a few months later, when my FXR was completed, my apprentice made me an offer I couldn’t refuse, and I found myself bikeless.

It had been some time since Jason had told me his bike was for sale, and I thought for sure at his price it would be gone by now, but sure enough, he still had it. We worked out a deal, and  Jason knew it was going to a good home.

Jason and I share the same tastes, and he had the bike set up pretty good right out of the gate. Being it was a Superglide, it already had the stretched rear fender, and he already had it set up with the RT fairing.

Jason is not quite as tall as I am, so I had to change a couple things to get me sitting right on the bike. He had one-piece pullback risers on the bike, so I changed those to 8 inch Biltwell Murdoch risers and tracker bars and used their Moto pegs to give me the mini floorboard effect. I really like the stock mag wheel look but didn’t really want to fool with the bearing conversion, so I scored a deal on an RSD mag wheel kit with matching rotors and pulley.

Jason had already put 13 1/2 inch Race Tech shocks on the rear but hadn’t done anything to the front suspension, so I upgraded to the standard Race Tech kit with the gold emulators. I took the stock seat pan and re-shaped the foam to make the seat a little flatter overall and moved the back portion further back, and had it recovered so it didn’t push me too far up on the gas tank. To finalize my fitment on the bike, I converted the stock mid control mounts to the further forward Mid style found on the stock Lowrider S.

I commute about 55 miles round-trip back-and-forth to work every day and love putting in as many miles as I can on two wheels. I had sold a 2015 street Bob that was set up perfectly for what I needed on my interstate commute every day, and I loved my FXR, but it’s tough to beat that six-speed overdrive. This Super Glide finally set me up with the perfect combination of my FXR and my Old Street Bob.

I rode the bike for over two years with the stock black paint job because the shop never really slowed down when we moved into the new building over two years ago. Here I was again stuck in the same predicament of being a custom painter and not having a calling card.

The only missing piece to the puzzle was finally getting around to putting the paint job down that Jason and I had initially talked about way back. This called for predominantly traditional Harley colors, black and orange, which was the goal of this paint job. However, in the middle of the process, I changed the black backdrop to a candy apple red with a fade to black. I stuck with Jason‘s original idea of incorporating flames and turned gold leaf. What was supposed to be a two-week job turned into almost two months due to adding different variations to the original paint scheme, but it’s finally completed just in time for this feature!

Jason and I are still friends. We are currently helping him get some parts together for a “performance“ Road King. He’s already let me know how much he misses his “baby“ and inquired whether or not I’m holding onto it. I guess only time will tell…..