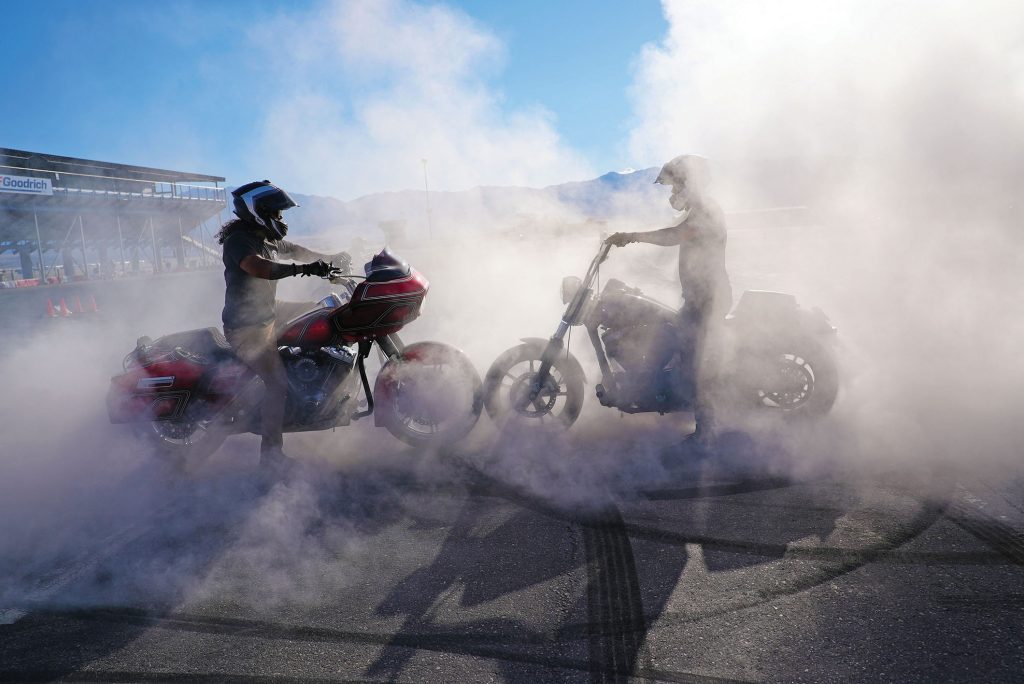 Article And Photos By: Gary Naito

The Bassani Xhaust Stunt Team performed at the Bagger Racing League’s Inaugural “Battle of the Baggers” event in Salt Lake City at the Utah Motorsports Campus on June 25-27. Team Bassani riders performed in front of massive crowds in the designated stunt lot set up on the west side of the race facility.

It was some of the most exciting V-Twin stunt riding ever gathered for a live audience. Jason was doing his usual radical stunt riding which included high speed drifting, wheelies, stoppies, inverted highchair scrapes and also tandem wheelies too!

Trust is the order of the day when Jason and Ang Pullen pull of their signature highchair tandem wheelie scrapes. It is almost impossible to explain…so let me try:

While Jason sits on the handlebars, his wife sits on the rear of the seat.  Jason somehow pulls the front end of the Sportster off the ground into a wheelie. He finds the balance point almost effortlessly while Ang sits on the rear seat leaning her head back far enough during the scrapes to make her helmet touch the ground.

The icing on the cake was seeing Samoan Bruce on in his beautiful red painted bagger for a stand-up wheelie in front of the crowd. He also pulled off drifts, and knee scrapes with his Bagger for some jaw dropping excitement.

The Roll bike would intercede in the action and do a somersault in front of the crowd for some “oooh” and “aaah” reactions.  Smash Stunts on her blacked-out bike, would come in for some fast circle drifting action and stand-up wheelies, scraping rear fender producing sparks.

Pullen also brought out his ramp for some jumps which Ang participated in landing a stand-up jump that needs to be seen to be believed. The crowed was amped and emcees, Marshall Tucker (LA Choppers) and Amanda (Icon), did one hell of a job announcing the event to the crowd. After the show, families lined up at the Bassani Tent to get autographed posters of their favorite rider for friends, and family.

We hope everyone enjoyed the show as much as we did and look forward to our next Stunt Show!