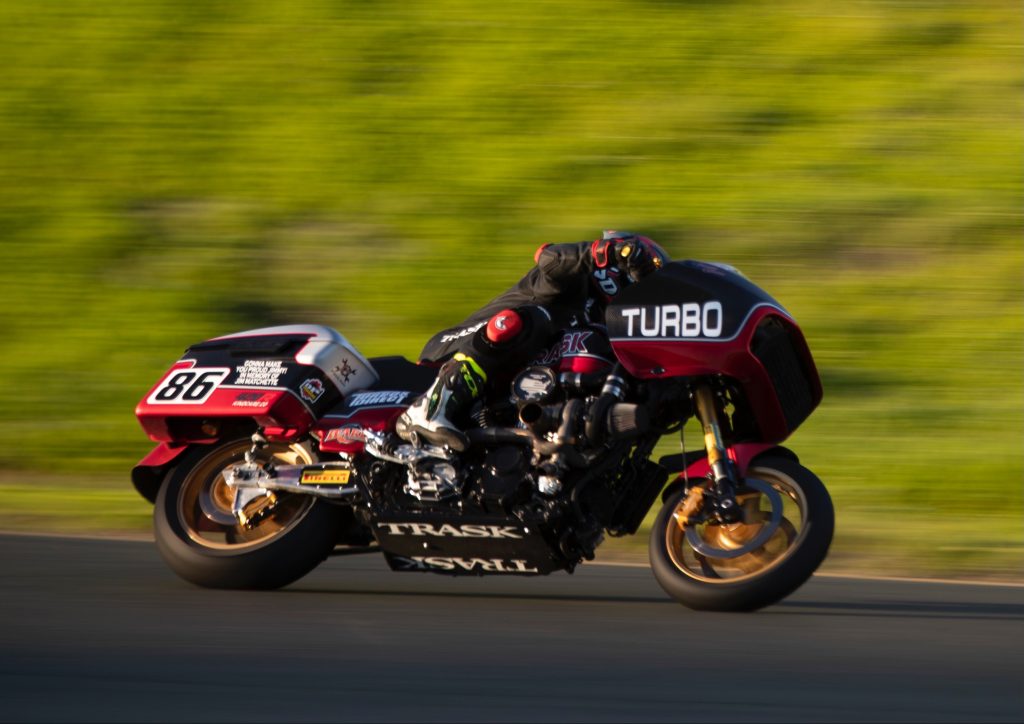 SONOMA, Calif. (December 15, 2021) – Pirelli Tire North America carried its momentum into the Bagger Racing League season finale at Sonoma Raceway on Saturday, December 11 by once again capturing the top step of the podium thanks to an impressive performance by Trask Performance’s Shane Narbonne.  Competing aboard a Harley-Davidson equipped with Pirelli DIABLO Superbike slicks, Narbonne would prove to be the star of the weekend by capturing the Custom Dynamics GP Bagger class win, which was enough to crown him 2022 Custom Dynamics GP Bagger class champion.

“First off, I just want to give a huge thank you to Pirelli for coming on board with my racing program,” said Narbonne. “It’s my first year working with Pirelli and this past weekend was an incredible time working with Oscar [Solis] to get my bike working great with the sticky tire, even though we had cool temperatures. We had a great tire choice for the race and the tires worked amazing the entire time, which allowed me to take the Bagger GP victory!”

Narbonne consistently set the pace throughout the weekend by capturing pole position and the fastest lap of the weekend using a Pirelli DIABLO Superbike SC1 front slick in 120/70R17 sizing and a DIABLO Superbike SC1 rear slick in 190/60R17 sizing. He would overcome a mid-race charge from his competitors and use excellent late-race speed and grip to prevail. The race-winning performance helped clinch the class championship and prove Pirelli’s capability in bagger racing.

“What an experience! This series presented a lot of challenges to the tires but that’s where we thrive,” said Oscar Solis, senior racing manager, Pirelli. “We had zero laps of testing to start the opening round of the Bagger Racing League. From the hot and fast Utah round to the cold and difficult Sonoma round, Pirelli riders kept their head down and put all their trust in their Pirelli DIABLO Superbike slicks. Congrats to Shane who really pours his heart into our sport. He had a great start and faded a bit but kept pushing and was able to take the win and eventually the championship!”

Pirelli continues to set the bar in roadracing throughout North America, and when spec tire rules do not apply, has been the go-to tire choice for racers looking to reach the top step of the podium. Pirelli’s success in the Bagger Racing League has been no exception, with wins at both the Utah and Sonoma rounds as well as setting the fastest lap time of the weekend both times.

Pirelli was founded in Milan in 1872 and today stands as a global brand known for its cutting edge technology, high-end production excellence and passion for innovation that draws heavily on its Italian roots. With around 30,000 employees, Pirelli is a major player in the tire industry and the only global player focused solely on the consumer tire market, which includes tires for cars, motorcycles and bicycles. In particular, Pirelli is a global leader in the production of racing and high performance motorcycle tires both for on and off road applications. Pirelli has a long link with motorsport and the multitude of successes include a record of seventy-two world titles gained in the FIM Motocross World Championship thanks to the performance of its mx product range. In road-racing, since 2004 Pirelli has made the FIM Superbike World Championship for production-based motorcycles the ideal proving ground to develop not only the products used in competition, but also tires used daily by motorcyclists all over the world. Inspired by the philosophy now become a motto “We sell what we race, we race what we sell”, Pirelli has managed to bring to fruition all the experience acquired in this championship, applying some of the patents and materials developed for racing activity to the product portfolio dedicated to road use.