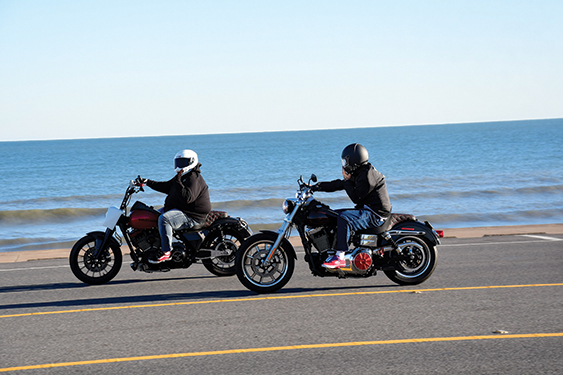 Freshening Up The Big Boy FXR

Article & Photos By: Nothing Stock Cam

With the already smashing success Torque Magazine has seen since the inaugural issue released in August 2021, I was humbled to have been asked to write an article for the second issue to drop in quarter 4 of 2021. Keeping in line with something I’m incredibly passionate about, I started researching USA companies that produce products for American motorcycles.

Since coming home from the 81st Sturgis Motorcycle Rally, I decided to tear down my Big Boy FXR (2010 Road King Police) and freshen her up a bit. One key detail I knew was a “must-have” were mid controls. I needed to get my feet under me instead of in front of me to have better control and handling capabilities through the twisties that I love so much. There are a few USA-operated companies that produce mid controls for baggers. This time, I chose a company from my home state; Dropkick Customs out of Tampa, FL. Matt from Dropkick is a super nice guy, is easy to work with, and is willing to answer any and all questions you’d have for all of their offered products.

With most projects, you’re bound to run into at least one issue. In my case, it was the exhaust. The exhaust I was running would not mount up with mid controls. The rear head pipe just didn’t come close to curving around the right control. James, one of my closest dudes, sent me a link for RedFox Baggers with an exhaust system that looked to be made for my purposes. After contacting them about their stock, I was able to get the information for the actual owner/operator in the Dallas, Tx area. With an upcoming previously scheduled trip to Dallas for pleasure, I chose to turn it into a working trip.

Rickey Graffeo of Graffeo Original Exhaust Systems welcomed me to tour his small shop where he creates, in my opinion, one of the most beautiful pieces of art you could hang off the side of your motorcycle. They are hand-shaped, tig-welded, stainless masterpieces with dyno-proven numbers we all want on our performance baggers. Rickey and his son Rick Graffeo are the real deal, small, independent style shops I love to do business with. Spending about an hour with the boys, I heard a bit about him and how he ended up coming out of retirement to produce these functioning pieces of art about four years ago.

At age 11, Rickey started working for his uncle in New Orleans, LA, in the HVAC industry. As Rickey was talking about those days, I could tell they had a special bond. After 13 years of doing HVAC, Rickey decided he didn’t want to be in that field but had always had a passion for welding. For Rickey’s birthday that year, his uncle gave him a welding machine, helmet, and gloves and said, “get to learning.” For the next 45 years, Rickey had a great career as a cryogenic tig-welder and earned the nickname “Golden Hands Graffeo” after his uncle said, “Rickey, I’ve never seen someone who works like you. You’ve got golden hands. Don’t ever mess them hands up”.

Also, while visiting with Graffeo’s, as you’d expect in the motorcycle game, we found we had quite a bit in common, including being gun-toting rednecks. Rickey showed a few cool pieces in his collection, one being a CZ Shadow 2. He said, and I quote, “This firearm is so tricked out and accurate, Stevie Wonder could shoot it and hit the X.”

After reviewing my photos of the mounted mid controls, my side covers, and cases, Graffeo and I discussed design and measurements to solve the problem of not having an exhaust to work with my setup. As I explained to Rickey, I didn’t have the time to order and keep trying exhaust systems until I found “the one.” With Rickey’s long-time knowledge and expertise, he created the Graffeo Original Exhaust – NSC Pipe (Nothing Stock Cam). For you performance bagger guys and gals running mid controls, this pipe was designed and created to fit perfectly, looks amazing, and puts down the dyno numbers. No more questioning fitment. You can call Graffeo directly and get your “NSC” Pipe ordered today.

Before I close this one out, I want to give a special shout-out to a few guys. James Melton, Jason Kenny, and Jon Luft. These 3 have been called upon for help on numerous occasions. They will show at a moment’s notice and always help me get whatever done with my bikes that needs to get done. Good friends are hard to find. Thanks, boys.

If you have a small business (motorcycle-related) or know someone that does, feel free to reach out to me. (NothingStockCam@gmail.com) I’d love to get to know you and your products and maybe write about you also. Small business owners are a key element to the American Dream, and somewhere along the way, people have forgotten that. “Oh, I can get that cheaper from China.” The old saying is, “you get what you pay for.” Save a little more to spend on parts made here in America. In the long run, you’ll be glad you did.