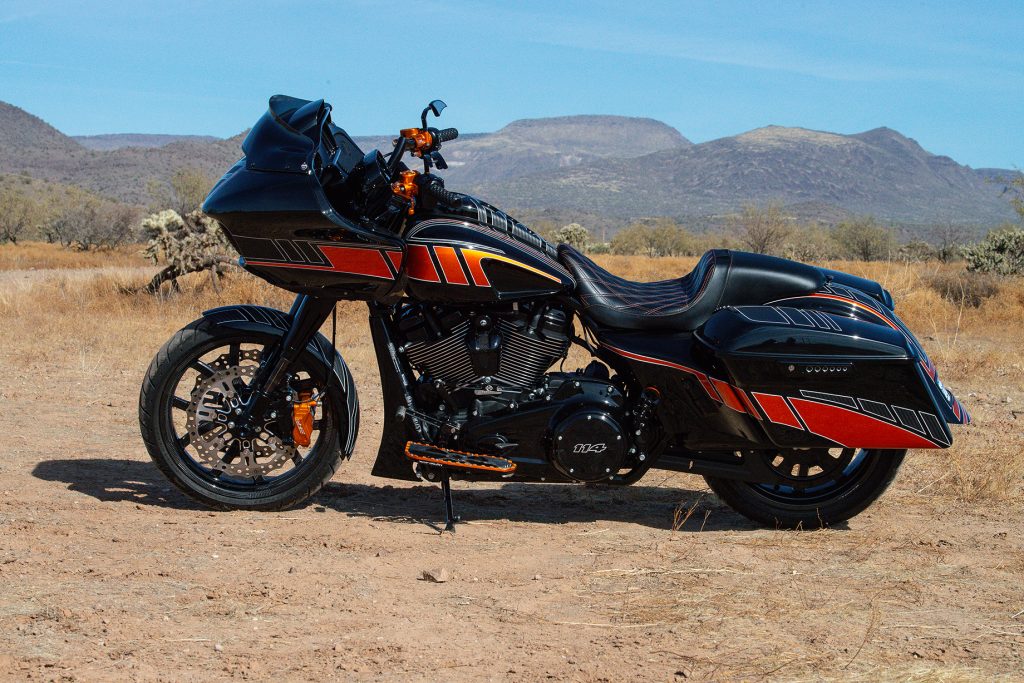 The Law Tigers organization (based in Phoenix, Arizona) isn’t just a law firm. It is a group of attorneys firmly entrenched in the motorcycling community in over 30 states in the USA. Their primary spokesperson and corporate leader is Ari Levenbaum. This feature is about his custom-built “Paul Yaffe’s Bagger Nation” Road Glide. As many of us do, Ari and Paul became acquainted with each other through their passion for motorcycles. It is impossible to deny that once the common ground of a mutual love of the motorcycle is established, a friendship usually isn’t far off.

Lots of people would love to have an original Paul Yaffe bike. Ari was no different. Paul has been a leader in the industry for years. His style is unmistakable. He goes to great lengths to collaborate with the best parts makers in the industry, and his parts can be found on many of those builder’s bikes too. Ari approached Paul about fulfilling his dream of having a custom motorcycle built. The bike you see here is a direct reflection of the conversation between builder and client.

Building a custom bike for a client is an intimate experience. The best builders understand exactly what the client is trying to accomplish. Some customers want something subtle while others want flash. Being a custom builder requires you to find that place the customer wants to go, even when the client doesn’t have the words to take you there. Paul is the type of builder with his own unique styling queues. When a client ends up at Paul Yaffe Originals, Paul already has an advantage. Paul’s work has been featured for decades in magazines and on television, and at every major rally. This usually means that the customer has already seen Paul’s work and is eager to see their dream bike come to fruition. Paul has the vision to forgo the pleasantries of browsing a parts catalog and get right into the concept.

Ari wanted something faster than the average Road Glide and something that would promote his brand without losing the essence of the motorcycle he started with. He needed a bike with just enough properly placed branding so that it would stand out in a positive way no matter how many bikes were parked next to it.  Ari knew that if Paul built it…it would never get lost in a parking lot. It would draw the right kind of attention, be fast, look fast, and be dead reliable to ride in any weather conditions for short or long distances.

Ari and Paul were able to work together from the instant the decision was made. They both knew that he and Paul were on to something. The entire build went exactly as was expected. However, one thing that did happen unexpectedly: the friendship that Paul and Ari now share. It is funny to think just how things can work out that way. Like I mentioned previously, building a custom motorcycle is an intimate experience, and sometimes new friendships just fall into place.

The engine in Ari’s bike was built and tuned by Jack Gould and inhales and exhales through a Trask Performance air intake and stainless exhaust system. A Fueling cam actuates the valvetrain, and the engine is tuned via a Techno-Research tuner.  The forks and trees are from ODC. Paul swears by the OCD suspension systems, and you’ll see their parts on many Bagger Nation builds. This Road Glide rolls down the road on BST carbon fiber wheels wrapped in Dunlop rubber. Twin Rebuffini calipers halt the oversize front rotors to a dead stop. The orange, black and grey paint was handled by Rolling Art Custom Paint. There is no chrome left to speak of on Ari’s bike. Paul opened the Bagger Nation vault for the front and rear fenders and the fuel tank, bars, and risers to round out the parts list on the Tiger Glide. A LePera “Kick Flip” seat provides riding comfort. The hand controls are from Rebuffini.

All in all, I’d say that these two make a perfect pair. Ari went to Paul for a motorcycle and left with a friendship any guy would be proud to hang his hat on. In fact, Paul and Ari have already collaborated on what will be the biggest prize giveaway in Sturgis history, a brand-new Road Glide built by Paul Yaffe’s bagger nation valued at over $90,000. We cannot wait to see what this pair conjures up next to work on!