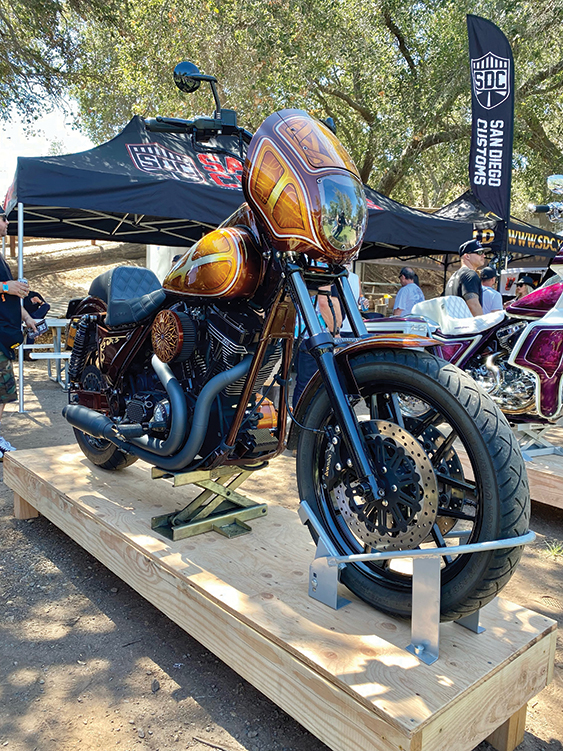 Article And Photos By: Chris Rosenberg

As most people know, Born Free was postponed in 2020 due to Covid. Alleyway Customs knows this story all too well.  Of course, we had built a bike for the Biltwell’s “People’s Champ” competition, 2020. We made it to the “Final Six” cut in the competition, which meant a guaranteed trip to California. Unfortunately, luck wasn’t on our side that time; but business is business. A new 2021 competition started, which left our trip in limbo while everyone sorted things out. We were finally given an invitation to display our bike alongside this year’s competitors and almost two years later locked in our travel plans! We took off the Tuesday before the show on our three-day trip across the country. We were excited and had very high expectations that we would finally experience what is rumored to be one of the best shows in the country. We were not disappointed!

With beautiful sunny (humidity-free) California weather on deck, the stage was set at a massive venue filled with all the nation’s top vendors, builders, and show bikes. There was an impressive display of motorcycles that were ridden to the show. Bikes could park in the grass area with a specially purchased pass or in the general parking area. I’ve always heard that the parking lot could be a bike show in itself, but it wasn’t until I saw it for myself that I could grasp just how killer it actually is. The Ives Brothers and their Wall of Death shows were on hand all day Saturday and Sunday. As if all of that wasn’t enough, during the awards ceremony on Sunday, they also gave away three bikes: A 1939 Knucklehead restoration, a full custom FXR build from San Diego Customs, and a modified brand-new Harley Lowrider S!

While the Born Free motorcycle show is most recognized for its excellent display of Vintage Choppers, several years back, they added a performance-based show for FXR‘s and Dyna’s put on by San Diego Customs. In 2021, they separated the two shows. Now, Saturday is the FXR show, and Sunday is the Open/Bagger show which was essentially Dyna’s and Performance Baggers.

This division within their show has been growing for many years. This year was no different. There were tons of the most recognized bikes we’ve all seen on social media, as well as dozens of fresh new bikes. There were also more traditional FXRs at the show that did not vary far from their original components. They did have performance upgrades and traditional takes on modern paint. There definitely was a strong trend leaning towards the ’90s influenced bikes. Many of the most recent builds threw a serious nod to Arlen Ness.  In fact, there were even two of Mr. Ness’ personal builds displayed by their current owners.

The addition to the “Performance Bagger” category was equally impressive this year.  There were bikes from the Bagger Racing League (www.baggerracingleague.com) on display, as well as plenty of new builds that leaned toward the race bike theme. While this show displays many of the nation’s top builders of these style bikes, it is also a platform for all builders, not just professionals. All you had to do was obtain a General admission grass pass, and then you could enter whatever bike you had built.

The performance shows definitely give off a different vibe than the majority of things going on at Born Free. Still, they are no less of a tight-knit community. Many of these enthusiasts get to the show early to hang out and meet the other builders. They meticulously go over each other’s bikes and pick each other’s brains about their choice of parts and design. Many of the industry’s top names actively socialize with all of the builders and attendees, and that makes it a really friendly and welcoming experience

Overall, this particular part of The Born Free show continues to grow year after year. If you are in the California area in June, I highly recommend checking it out.