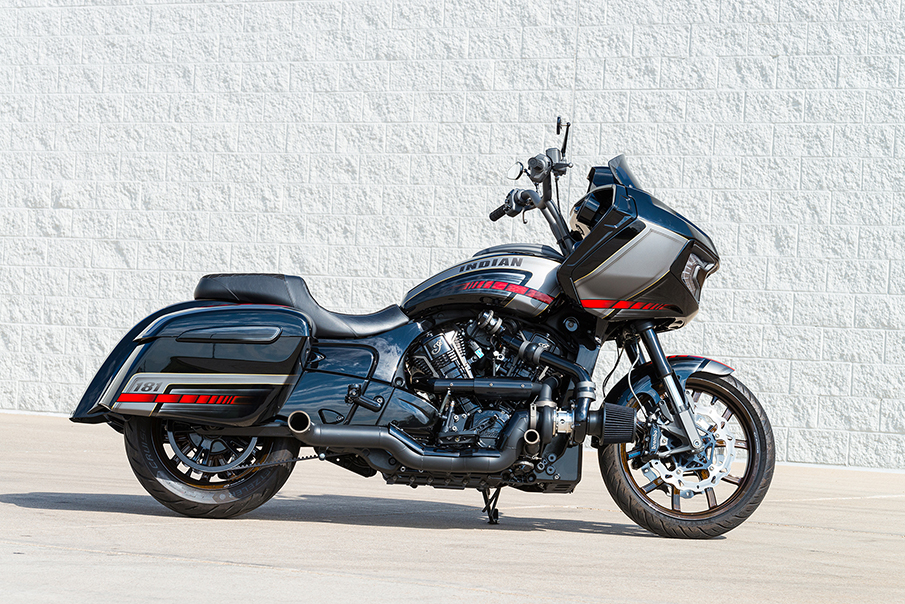 If you had two men working 16-hour workdays for 60 days in a row, do you know what you would get? You’d get the motorcycle that you see here on the pages of TORQUE Magazine. When JC Mason of Rolling Art Custom Paint and Mike Porham of CMP Motorcycles in Phoenix, Arizona, set out to build this Challenger, that was exactly the amount of time that they had to complete this project and make it to Sturgis.

Of all the motorcycles on the market to choose from, it is nice to find a brand that seems to check all of the boxes you look for in a motorcycle. Indian’s Challenger certainly has made a wave in the performance industry with unique standards like an integrated driveline (this means that the transmission and engine are unit construction), single coil over mono shock in the rear, and inverted forks (standard front) with Brembo calipers on both ends (dual front radial mount calipers). It is easy to see why JC chose the Challenger platform for his muse.

In addition to the equipment that the Indian came with in stock form, JC wanted to be the first in the nation [ahem’…the world] to turbocharge a Challenger. For this, he went straight to Mike over at CMP Motorcycles. The two got straight to work fashioning a turbo kit that didn’t exist for a motorcycle that had never been turboed before. This meant that there were tons of challenges to overcome. First and foremost, the engine and components sit in a “cradle,” not a traditional frame like almost every other motorcycle on the planet. This meant that to modify the engine, it had to be removed from the cradle, modified for the CMP turbo, then re-installed. This also means that any future changes or potential damage from pushing the limits will make for a lot of work to repair.

Other challenges included but were not limited to the lack of a quality tuner available with the software to communicate with the Challenger’s ECM. The tuning was assisted by Lloyd’s.  The other issue was due to the overall “newness” of the Challenger. Parts were tough to source. There were plenty of other things that were not for the faint of heart, tools, or abilities. All in all, Mike and JC have about 1920-man hours invested all in a matter of two months from paper and pen to in the trailer and off to Sturgis!

JC’s first ride on the Challenger was in Sturgis. With the turbo producing 5psi of boost, the Indian belts out 185 horsepower to the rear wheels. With that kind of power, the rider can’t even hit the peak without a serious conversation with themselves about the limits of man and machine. JC insists that no matter the boost, the tire can melt away at almost any speed. He also reports that he rides it as hard as he possibly can, every chance he gets.

Rolling Art Custom paint has been a family business since 1972. JC has been at the helm for 25 of those years. Since custom paint is in the family, you didn’t think JC was going to show up to the party in stock paint, did you? JC wanted a performance paint job that still says “Indian” but looked racy and used the factory lines to accentuate the overall look. A Klock Werks front fender, molded bag lids, and fender all make for a streamlined look. JC and his main man Jerry removed all of the plastics on the bike and smoothed them out. Never one to leave a stone unturned, JC and Jerry removed the inner fairing for molding and paint. The inner fairing requires 20 hours to remove and install, so the next time you see a custom Indian Challenger, and the fairing is stock, you’ll know why. If there is any space that the Indian can be criticized for, it is in the ergonomics and aesthetics of the controls. JC originally Cerakoted the stock hand controls, but he has installed a full complement of Beringer brakes and hand controls since our photoshoot. CMP’s Mike Porham is responsible for the mid controls, and Boosted Brad supplied the pegs. The seat was modified and covered by Guy’s Upholstery in Mesa, Arizona.

The bike sat for an entire year before he had a time slot to build it. In two months, it went from stock to what you see here. It was all hands on deck until the bike was done. JC would like to acknowledge a few folks who helped him finish this beast on time for its maiden voyage. Mike Porham for the hard work and turbo, Brock Davidson for being a good friend. Mr. Brian Klock for the killer front fender, Jake from Barnstorm Cycles for his awesome inner dash kit with navigation relocator & tee bars. Paul Yaffe supplied the bullet kit for the rear fender. Boosted Brad’s Death Metal Racing for the footpegs and Guy from Guys Upholstery for the seat work.

Value: I’m afraid to tally it up! 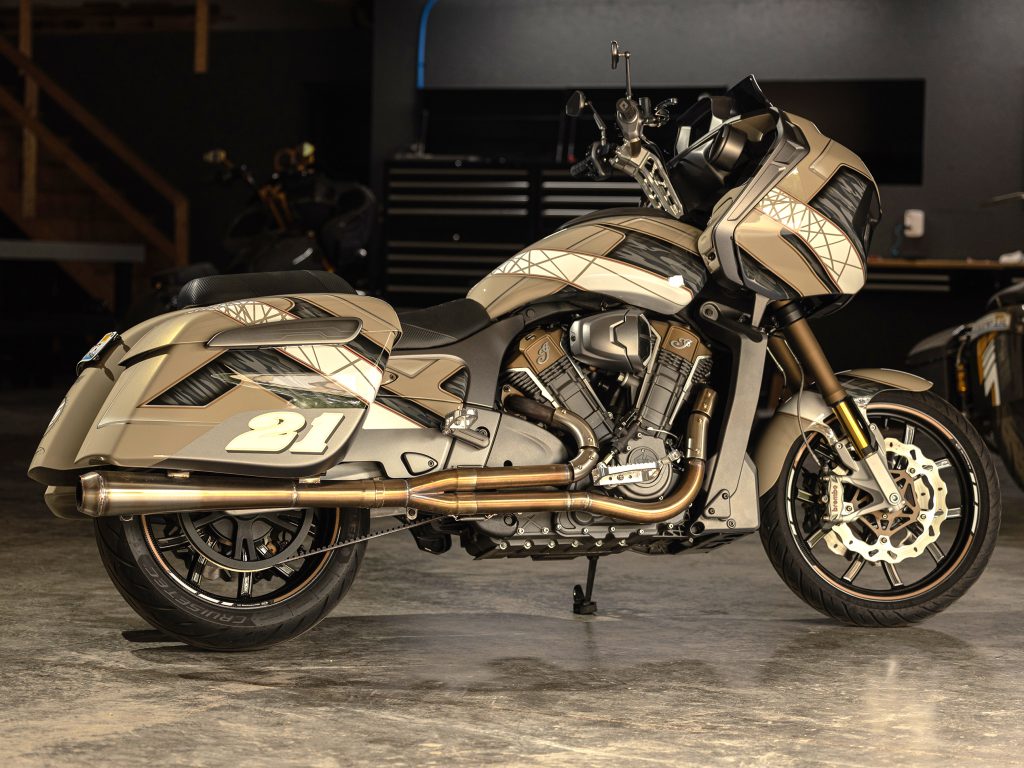 Read The Whole Story On The Torque Mag USA Website

hen Indian dropped the new Challenger, many folks weren’t as keen on it as I was. The second I saw it I was a fan. While it is nearly impossible to deny the resemblance to a certain other popular bagger-style bike manufactured by a certain American company, I’m not bothered one bit. Besides, who doesn’t like a good competition? I mean doesn’t Burger King need McDonalds? The Challenger came to party. Brembo radial mount calipers, mono-shock rear suspension, inverted forks, overhead cam four-valve engine with 120 horsepower…need I continue? This Challenger is owned by Kyle Bertsch. Most people know Kyle by his Instagram handle: @instahavinkyle. Kyle is a super talented guy and an avid skateboarder too (he skates daily when his body allows). His new (epically cool) shop “Forever Rad” is in Hillsboro, Missouri just south of St. Louis replete with a car hoist and several skate ramps as well as every tool one could need to customize…well, just about anything you can sit in or throw a leg over.

After a ten-year stint working east of the mighty Mississippi River with his friend and mentor Jason Sprengel at Sprengel’s Innovative Kustoms in Illinois Kyle made some moves in 2021. This year Kyle moved west of the Mississippi and branched out on his own to start his first solo shop; Forever Rad which will specialize in everything from custom lay frame Harley’s to Hot Rods and Classic cars. While you may not already know Kyle, it is entirely possible that you may have seen his work and may already have met or been standing next to this fella at any number of rallies or events around the motorcycle community and not even known it. It is also likely that you may have heard him on the Fast Life Podcast. He and Jace Hudson are homies and the photo spread you see before you is courtesy of Mr. Hudson.

Kyle is no stranger to travel, in fact it was during his rigorous travel schedule that Kyle kept encountering Indian bagger owners over and over. Each time he would meet someone new riding an Indian he would ask “why?” “Why an Indian and not a Harley?” Each time he got the same, or similar response. Once he finally had the chance to ride one, he got it right away. The aforementioned factory equipment on the Challenger made the bike he was currently riding simply below par for the kind of riding Kyle was ready to start doing. After his first 100-miles, he decided that the Challenger handled awesome, stopped awesome and overall was just better than an M8 motorcycle. That is a bold statement for sure! He also liked the idea of “poking the bear” so to speak. It is impossible to deny the resemblance to a certain other “fixed fairing” bagger.

For starters it is impossible to miss the killer paint scheme on Kyle’s Challenger. The subtle use of denim finish on the body parts paired with the race number graphics scream performance. This paint job is a collaboration between artists, Jason Sprengel, Austin Polen and Kyle.  Kyle told us that watching Jason and Austin work on this paint job together could be compared to having two tattoo artists work on a back piece at the same time. Once the graphics were decided upon, Kyle needed something to break up the flow of the paint job. The 21 symbolizes a big year for Kyle it is the year he completed this build, and it is also the year he started his first professional shop as a solo shop owner.

Even though the Challenger comes factory equipped with a ton of top shelf components, Kyle didn’t let his Challenger rest on its laurels. Of course, no new motorcycle comes equipped with suitable exhaust for an aggressive enough sound, so Kyle installed a one-off CMP Motorcycles stainless steel 2 into 1 exhaust to give this already “torquey” power plant some extra umph as well as the right exhaust note. Risers and foot controls are from Boosted Brad’s Death Metal Racing. Brad’s parts are 100% made in the USA and they are of very high quality. They look perfect on the Challenger as do the risers (also from DMR).

The stock hand controls on the Indians are one specific place that the masses find fault in. Aesthetically speaking the words “cheap looking” and “too plastic” are conjured up in most conversations around the table. Kyle turned to Beringer for hand controls and to Arlen Ness for the mirrors. The grips are from ODI which suit the flow of the bike, are high quality and very comfortable enough to ride long distance.