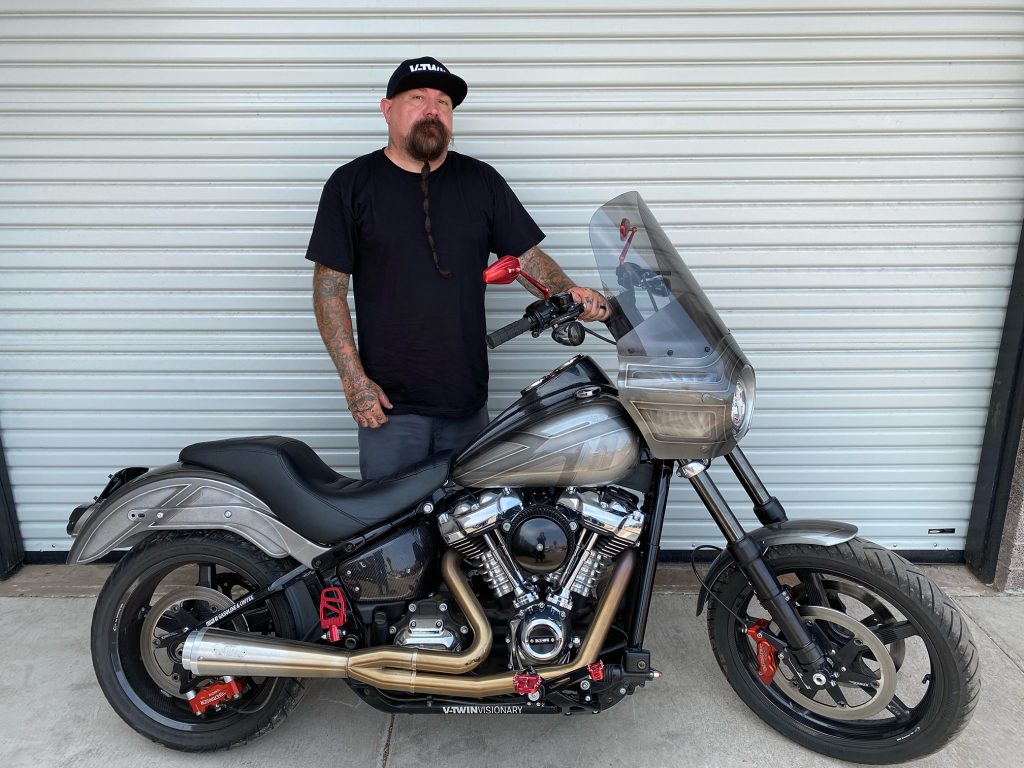 Inside Out With Jeff G Holt

It’s been three years since I have sat down to write a feature for a paper magazine. Since my demise of being the editorial and brand director of Hot Bike, Baggers, and Street Chopper magazines, it seems as if the whole world has gone paperless. The huge magazine racks that used to fill retail stores are gone, and along with it, many great features, articles, and photography are no longer easily accessed by simply flipping through pages. This is why I jumped at the chance to be a part of Torque when I was asked. Sure, I have my own thing going on with the V-Twin Visionary brand that easily takes up all of my waking hours. Still, there was something about getting back into a paper periodical that excited me enough to do so.

And here we are. Talking about custom performance motorcycles. And now V-Twin racing. I made my stand in the V-twin industry for years, waving the performance flag when it was all big wheels, fat tires, and affliction jeans. Back in 2013, when I was finally given full reign of the design, concept, and content of Hot Bike magazine,I wanted to put out something that would put an end to the “custom” motorcycles of the day. The hangover haze of Discovery Channel show bikes was getting long in the tooth. In all my ego-driven brashness, I had to do something about it. Harleys were always about performance to me. Club bikes, Drag bikes, and even what the guys in East LA and Compton were doing to their Baggers always piqued my interest. I decided to put a white Dyna built by San Diego Customs and owned by legendary skateboarder Corey Duffel on the cover of Hot Bike with an all-new logo that harkened back to a time when the magazine was full of Shovelhead and Evolution performance motor and bike builds to put all the trucker chicks, skulls, snakes, bolt-on doodads, and spinning dice theme bikes behind us. Corey was in a jean vest, faded Levis, some beat-up boots, and a Simpson helmet. It was an action shot with Corey rockin’ the horns while being chased by Chip and photographed by Mikey of SDC. There were no blonde chicks, chromed-out bikes, or big wheel baggers anywhere near that cover.

As we put that issue to bed and were ready to walk out the door for Thanksgiving vacation, I got an email from the head group publisher. I figured it would be an email from the Big Cheese telling me what a great job I had done on the new look and feel of the magazine. And boy, was I f#@king wrong. He was in shock that the bike was not black or red. And that we didn’t have multiple bikes at different angles on the cover. He was in utter amazement that we did not have an “All-American” looking girl (i.e., a tan blonde with big boobs) on or near the bike. At the end of the email, there was the kicker. It simply said, “If we let this issue get to the newsstand the way it currently is, it would be like committing mass suicide.”

Of course, my editor John Zamora and art director Robert Martin took major offense to this email. Hot Bike was on its last legs from the years of regurgitating old and stale content to a geriatric customer base. I was tasked with putting together a team to take this magazine (and brand) into the future of custom and performance V-Twins. I honestly felt that this very issue was the archetype for all future performance and custom H-D magazines. And after reading that email, it honestly looked like it wasn’t ever going to happen. I was so pissed that I quickly fired back an email telling him how shortsighted and plain wrong he was about every aspect of the new version of the magazine and literally betting my job on the issue and its promotion of the redux rollout would do even better than projected. And after I waged my entire career on something that management thought would fail, it f#@king killed it on the newsstand. For years, my crew and I jamming the pages of Hot Bike cover to cover with fast bikes built by a new crop of fabricators who put function over form. It was a great run at the helm of the magazines until a corporate acquisition, and a new management team mismanaged the magazine into non-existence.

And here we are in the now. Where Performance Harley-Davidson and Indian motorcycles are on the rise throughout the world. It is a great feeling to know that I have had a hand in showing guys and gals that custom motorcycles don’t have to be just pretty machines that can only go in a straight line. But that these bikes with big brakes and real suspension can get down on both the street and track and look good doing it. And to think, it almost never happened…