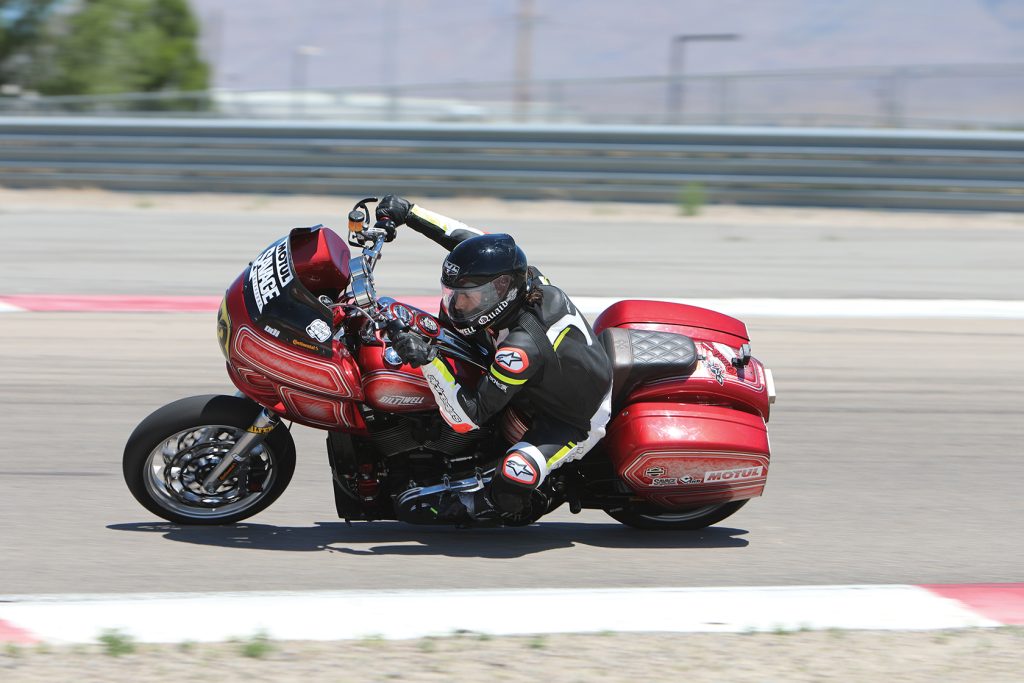 Battle Of The Baggers ’21

Barnes Takes The Win, Fernandez Breaks The Barrier In Utah

Putting a race together sounds simple enough. Call every manufacturer you know, get a few distributors on board, rent a track and then call a few friends that like to ride fast…sounds easy, right? Well, if everything hard to do seemed so upon first glance, how many great ideas would fail before they even get a chance to become a reality?

It doesn’t really matter “who” had the bright idea to create a league of extraordinary racers, manufacturers, and distributors. The fact is that the Bagger Racing League went from concept to reality in less than one year.  Not to mention, it was planned during what was likely one of the most challenging years to put a plan in place since Harley Davidson and the Indian Motorcycle companies began their tussle for first place over a century ago.

In short order, the Bagger Racing League has proven beyond a shadow of a doubt that there are more than enough riders with the required intestinal fortitude to throw a 600-pound motorcycle around a track designed for much lighter and certainly more venerable race machines…or so one would think.  They have also garnered enough industry support to financially back a new race series.

The fact of the matter is that at nearly 600 pounds (plus rider), the Indian and Harley Davison baggers, Big Twins, and Hooligans were not that far off the mark from the other two-wheeled race machines. By my standards, they are exceptionally more exciting to watch battle for the pole and to see get tossed into the turns at speeds exceeding 100 mph!

There were four classes to choose from at this inaugural race at the Utah Motorsports Complex just outside Salt Lake City. The views are breathtaking, the people are nearly overly friendly, Salt Lake City was welcoming in every way. I’ll definitely be back!

Let’s start with the Hooligan class. It seemed to be a placeholder for the future pros of the sport. Made up of primarily race-prepped Sportsters, the Hooligan class left nothing on the table as far as performance and excitement. During qualifying sessions on Saturday, there was plenty of posturing for the pole position. There were grassroots teams and pro teams alike, with every rider working hard to make themselves and their machines race-ready for the final heat on Sunday. Benny Carlson (#45) topped the podium with Alfonso Vasquez (#51) and Gregg Stinnett (#816) rounding out 2nd and 3rd respectfully.

The Big Twin class was by far the largest, with 22 entries. Being the largest class, you got to see the widest variety of riders and machines. The class was made up of mostly Dyna’s of every unique configuration. This class held the distinction of being the class that represented the grassroots movement the most. Some teams were as large as five to six riders, all functioning as a family and went to great lengths to help each other out when the need arose. There were several spin-outs throughout the weekend, most of which didn’t take the rider or the bike out of complete contention. Whenever possible, the teams pooled resources and made the most out of what was left just to see their fellow racer (competitor) get back on the track to make the next qualifying session. The number 1 qualifier, Rennie Scaysbrook (#33), held his position all weekend long and took the checkered flag, followed by Sean Ungvarsky (#48) and Anthony Sollima (#12).

Pro Stock Bagger was the class that had the most eyes on it. Riders like Steve Chamberlin and Tony Tucker pulled out all the stops and brought out the best of both riders. Tony Tucker of Tucker Speed is no stranger to V-Twin racing, but this being the inaugural event, the Tucker Speed team was just as green as their neon flat bill snapbacks. Their entry was finished at 1:30 am the day before the event and loaded in the trailer. Tony didn’t take the checkered flag, but he finished the race in the 4th position.  He learned quite a bit about suspension setup, and his bike ran flawlessly all weekend. The Lucky’s Speed Shop entry is the one that stole the spotlight for us. Karl Row and his rider Cody Dantley had their work cut out for them. They had the oldest chassis in the race, the smallest engine in the class, and the smallest rear tire. They fielded a beautiful 2002 Harley Bagger that was the only carbureted bike in the class! Look for a full feature on the Lucky’s Speed Shop entry in an upcoming issue! The Pro Stock podium had Benny Carlson (#9) up top, with racers Oleg Pianykh (#79) and Logan Lackey (#102), finishing the top three positions.

The Pro Class (Bagger GP) was the class everyone was pressed up against the fence for. The number one qualifier was Michael Barnes. Tyler O’Hara qualified number two with barely a one-second difference off the pole. When the checkered flag went down, it was pole-setter Michael Barnes (#34), followed by Tyler O’Hara (#29) and Corey West (#3) on the podium for 1st, 2nd & 3rd place. Interesting enough, it was Tyler O’Hara that posted the fastest lap in the race with a 1:38.550 lap time on lap 7.

The BRL made certain that there were plenty of other events happening throughout the weekend. The Bassani Stunt Team performed. There was the Arlen Ness custom motorcycle show and a manufacturer’s midway.  Overall the takeaway was that; the UTAH Motorsports Complex is a world-class facility accustomed to hosting world-class events. This one was no different. If you haven’t made plans to attend a BRL race, you should do so now because there is no putting the proverbial smoke back into the bottle.  The BRL is the real deal, and they are not looking backward.