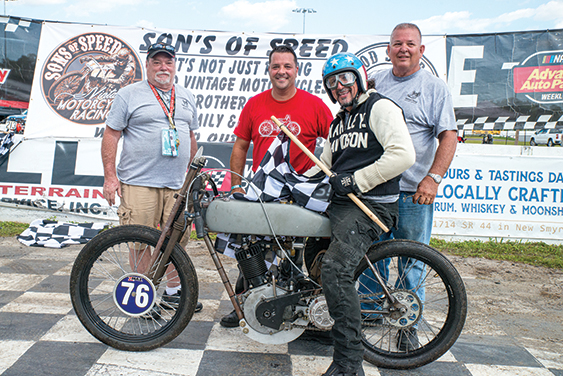 God Speed And The Adrenaline Rush

Read The Whole Article At The Torque Performance The Website

Over the last couple of years, I have found myself much more interested and much more able to attend some of the non-traditional motorcycle events. What I mean by that is that many folks (including myself) attend Biketoberfest and Daytona Bike Week in Florida annually but how many really venture off the Main Street looking for something else to occupy their time? This fall, I had the opportunity to attend a motorcycle event like nothing I have seen before. As a former athlete who has experienced some success at a national level, I was amazed to witness an event that unleashed the emotions of competition and pure adrenaline yearning to be awakened within my soul. That event is Billy Lane’s Sons of Speed!

Just imagine standing trackside surrounded by people on all sides chanting and cheering for their favorite rider. Their echoes ring into your ears and stimulate your senses. Your heartbeat, pulse, and body temperature elevate as you study the competition, ready to battle it out right in front of you on the half-mile oval that is the New Smyrna Speedway.

Imagine trying to contain your focus as you line up, side-by-side with your competitor, feeling the adrenaline rush through your body, igniting pure excitement. The hairs on your arms tingle, traveling down your arms and spine as you position yourself in a stance that prepares you for a face-off against your opponent on a half-mile banked wall asphalt track.

Standing in the pits of the Sons of Speed vintage race at New Smyrna Speedway was something I had not experienced up until now. There was so much happening. In between heat races, the builders, crew members, and riders bustled around the pits while the sweltering heat radiated down on them while racers like Dan Toce and crew member Steve Broyles prepared their team’s early 20th century machines for some vintage racing. The smell of hot asphalt, exhaust [race gas], and burning rubber permeated throughout the pits. The sounds of the antique single cylinder and v-twin engines rumbled through the air as the riders raced down a curved track with elevated banks on bikes that have no brakes! That’s right, no brakes! You could feel the energy from the competition surrounding you as the riders sped down a paved track neck-and-neck / side-by-side instilling trust in themselves, their crew, and their vintage machines.

As someone that grew up around recreational vehicles, dirt bikes, and motorcycles my whole life, this was a visceral event. I found myself drawn to the motorcycles in the same manner that I would be drawn to a historical event. Each one of these vintage bikes seemed to have a piece of an early-century rider that brought forth a new-century mark in the arena of competitive racing.

As I stood there watching the racers push themselves and accelerate their machines at high speeds of up to 80+ MPH along the track, the adrenaline re-awakened and rushed through every inch of my body. I could feel the hairs on my arms stand straight up (once again) and travel down my spine. Fans in the stands stood and eagerly watched the motorcycles make their way around the track. Cheers echoed from all around as the checkered flag waved while some of the best riders competed against each other.  Racers like Fast Freddie, Jody Perewitz, and eBay Jake were crowd favorites. At the same time, famed rocker Riki Rachtman announced the race progress! Even Cycle Source Editor-In-Chief Chris Callen took to the track on Tom Keefers’s vintage Harley twin.

If you want to witness history in motion that leaves you with an adrenaline rush, the Sons of Speed vintage motorcycle racing just might be what you need. A true modern-history event! Vintage bikes and pure speed! What an epic experience! 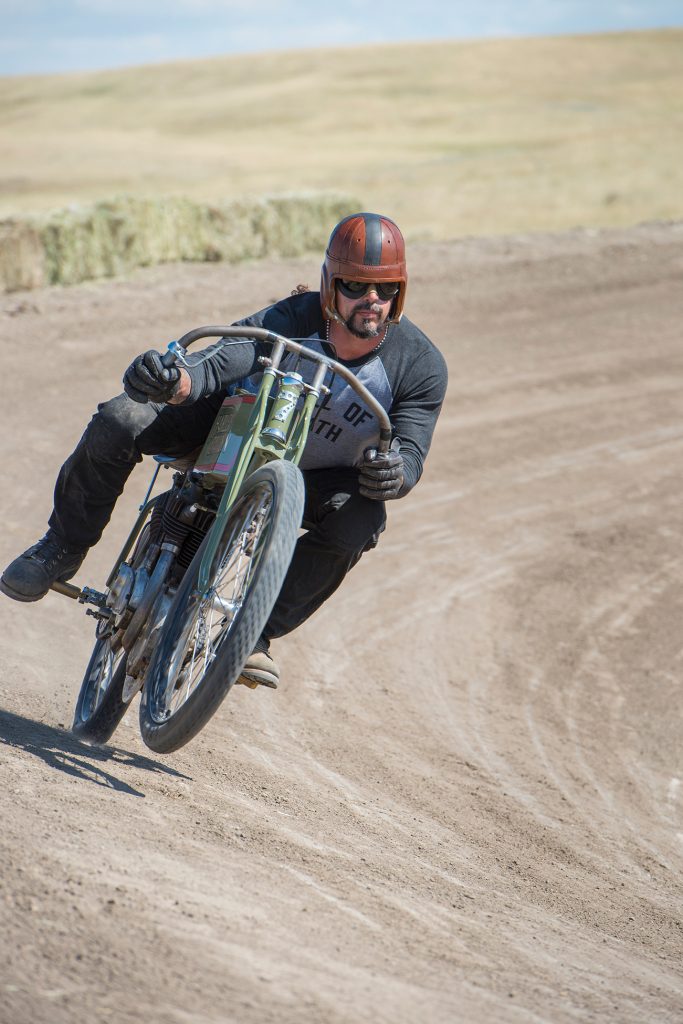 The Names & Faces Of The Performance Motorcycle World – Sons Of Speed

he purpose-built race prepared bikes from this period set the stage for what was to come, not only in how we race, modify, tune and repeat with performance bikes, but with custom bike building as well, as these truly were the first custom bikes.” – Michael Lichter

Ok…before I get scathing emails about why in the hell, we are running a feature on a 100-year-old motorcycle…Hit your asthma puffer, take a deep breath, relax and think about where our community actually fits into the culture of motorcycling as a whole. Can we all agree that our community is one of outliers, misfits and Ne’er do wells? Not that we aren’t good people or smart people. I would argue that our scene is made up of some of the most brilliant and ingenious riders today. Twenty plus years ago it was the guys like Aaron Greene, Billy Lane and Jesse James (to name just a few) that created mind blowing customs and rode them all over the place pissing off Karens’ before being a Karen was even a thing. Why should our scene be any different? I was a small part of the culture back in the chopper days and through sheer determination, a little hard work and some quality friendships, I’ve ended up here today writing this article. This article is a call to arms for all of those of you doing this in your 20’s, 30’s, 40’s and hell even those in their 50’s to get off your ass and do something life enrichening.

Everything has a genesis…a jumping off point, if you will, and more importantly, a purpose. Today’s performance rider sets their bike up for the type of riding they want to engage in. If you are a wheelie fan, then you likely have 13 or 14-inch shocks. If you fancy a stop light to stop light drag race, then maybe your front end has a travel limiter, and your rear tire pressure is ten pounds under the recommended PSI so make the tire side wall flex a little. When you put it in to context in this way, it was really no different then, than it is now.

100 years ago, motorcycle board track racing was the rage. Motorcycle races consistently drew larger crowds than the automobile races did. In fact, back in 1915 in Chicago, a motorcycle board track race was attended by 80,000 spectators compared to the Indianapolis 500 which was attended by a far fewer 60,000 spectators only three weeks earlier.  n 1910, in Tacoma Washington 35,000 fans attended a motorcycle race. The population of Tacoma was only 83,000 residents at that time.

This motorcycle is an original 1912 “Flying Merkel” purpose built by Billy Lane.

In his own words Billy Lane explains:

“I installed the original rear wheel hub & switched the rear chain drive back over to the left side, like it should be. The center shaft is now machined to accept the original pedal crank, which I’d previously eliminated for racing. She’s cold-blooded & warms up slowly after I replaced the Linkert carburetor with the original Schebler. I never wanted a loud, orange Flying Merkel, but I’ll hand start this f#@ker in front of a loud orange shipping container any time”.

This Flying Merkel sounds as “purpose built” as any performance twin I’ve ever seen! We will continue to feature the origins of performance in every issue of TORQUE Magazine to pay homage to the enduring pioneer spirit and the evolution of performance!