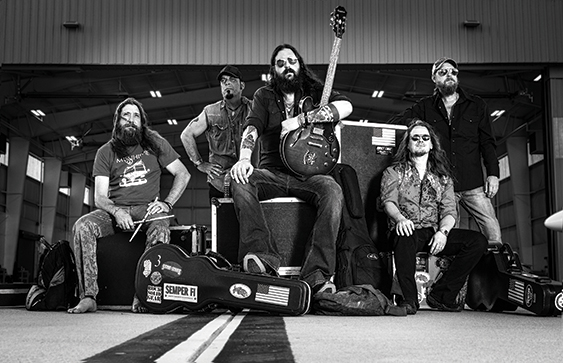 I’ve never felt like music was disposable. There are only the songs and the bands that I liked or disliked based on their music. I first heard Stone Senate in Tennessee in 2019 at the Tennessee Motorcycle and Music Revival. They blew me away. I was instantly a fan. I’ve since seen them play everything from a crowd of ten to a crowd of 100+.

You can tell when a band really “strikes a chord” with an audience (see what I did there?) when you find yourself in a crowd of a hundred or more folks that are all singing along with the band they came to see. Stone Senate is one of those bands…if you haven’t heard of them already, that is about to change. Their new EP called “Dusk” is out, and I’ve had the pleasure of listening to it pre-release.

While I am a fan of this band, it will not preclude me from being a critic, especially when it comes to the music. Those that know me know that I am something of a music nerd. This is likely why I was asked by this band’s publicist to review their latest EP titled “Dusk,” which features five original songs written by the band.

Whether you need a song to wind down to after a long day (“Slow Crusade” fits this nicely) or something to wind you up for the same reason (“Down” hits that mark perfectly), Stone Senate’s new EP, Dusk, has new runes that all have the Stone Senate sound; thundering drums, a heavy, greasy bass line, solid guitar riffs, and solos all accentuated by frontman Clint Woolsey’s signature vocals and rhythm guitar playing.

Rather than take up too much space on the road to success, Stone Senate is a band that is right at home riding the edge. Sitting comfortably with one foot firmly planted in Nashville and the other in Rock and Roll, Stone Senate can make you wanna slow dance with your lady to “Slow Crusade” or boogie with your girlfriend to “The Whiskey Helps!” The remainder of the EP plays well in any occasion that one would want to kick back and have a listen. My only complaint is that there are only five songs on this EP.

While it would be easy to relegate themselves to the “same old Nashville” sound and strike gold, which they could easily do, Clint and the boys would rather grind it out and build the right audience. One who actually knows a little bit about the band and can sing along at the gigs! A true American musical treasure, Stone Senate songs are timeless. Something most bands struggle for [some for decades] and never find. They have a sound that comes in somewhere between Blackfoot and The Eagles on some songs. While other songs find them harboring somewhere in a ZZ Top/Allman Brothers Band space. Southern music that makes you turn the dial all the way up and sit on the tailgate of your pickup!

This EP is available on iTunes, and if you’ve never heard of Stone Senate before, well…now you have! So get your ass out and see them play!