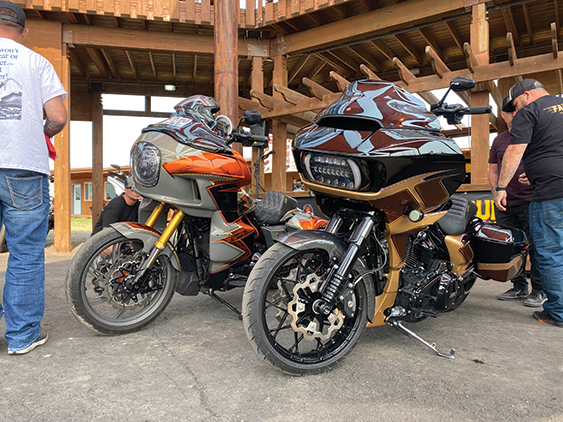 Read The Whole Article At The Torque Performance Web Site

To say that Sturgis was a little different from my perspective this year would be a massive understatement. I would attend all the shows in the performance segment in previous years as a spectator; now, I was there with a purpose. Even though TORQUE was brand new (the print product launched in Sturgis), the word had already gotten around, and there was much ado surrounding it.

For starters, my week began a full week earlier than normal. I arrived on the Monday prior to the official start of the rally. This meant that I was on the grounds way before the Callen’s arrived in town. I had other business to tend to, so while that was happening, I had the opportunity to get a feel for how the event would shape up before many others got to town on Friday afternoon.

I typically get into town on Saturday, which means that I miss any show on the first day of the rally. This year was different, which meant that I was able to attend Mondo’s show at the Chip. Mondo is a legend, and my long-time friend Aaron Greene was at Mondo’s show. I have to say that when I was asked to be a judge, I was beyond honored. I only wish my dad was still around to share the news with. Judging such a show means that you are trusted by your peers, and that was something I’ll never forget.

Sunday is always the same for me…Big Joe Mileke’s FXR show. This show is the best collection of FXR’s in Sturgis (some would argue the world), and again…I had the honor of presenting a trophy and judging the show. TORQUE Magazine chose the FXR build by Bare Knuckle Performance, which is owned and ridden by Jim Root of Slipknot. You can bet your a$$ you’ll see this killer FXR in the pages of TORQUE very soon! I also caught up with the other OG’s in the FXR world like Joe Jurado, Darrell Huxsol, Nigel Kennedy, Tom Edison, and of course, John and Tom Jessup from the Dream Rides family.

Monday was another day in the life of a magazine editor…this time, it was the Hardcore Cycles Performance show put on by my co-host on TORQUE Performance Television, John O’Brien. I am always surprised at the sheer number of bikes at the “pop-up” shows in Sturgis.  Monday was also the V-Twin Visionary Show in Deadwood. I haven’t found an effective way to clone myself yet, but I can tell you this; Jeff G’s shows are the archetype for the pop-up show, and they are all pro! The only solace I had in not being able to be in Deadwood was that I knew VTV was hosting a second show in Sturgis off of Main Street on Wednesday, so I was able to attend that.

Tuesday was a big day for TORQUE. This year Kurt Peterson from Lil’ Evil Inkorpor8ed asked us to manage his show in hopes that he could step back a bit and enjoy his newfound retirement. The show count was up, and most show-goers found their way to the pool for a dip. Torque has the distinction of being the ONLY performance motorcycle show in Sturgis with a pool! The Lil’ Evil Show is the first of its kind, the original “performance-only” show in Sturgis. Torque has big shoes to fill, but rest assured Kurt, still has his hand in the show’s success for the foreseeable future and will see to it that it stays true to its roots.

Tuesday night, the TORQUE Launch party went off without a hitch. I would like to take a moment to thank everyone that attended and send an extra special thanks to a few that helped make it happen. Curtis Hofmann and Sawicki Speed for donating killer prizes. To Jim Root and Xavier Muriel, two friends that make my job even cooler than it already was [is]. A big thank you to Nothing Stock Cam and all of the other staffers that helped make the first issue even happen. To my daughter Amanda and right-hand man Shannon Parkey for being there after long workdays over at J&P Cycles. To Stretch and Kimmie Sanderlin and Chris and Heather Callen for making good on every single promise they have made up to [and since] the launch of TORQUE! I also need to thank Kerry and his staff at the Iron Horse Saloon for hosting our event. I hope you’ll have us back every year for an industry party to celebrate another great year of TORQUE.

Whew…we are only to Wednesday, and my fingers are tired! Wednesday is the Perewitz Paint Show at the Iron Horse Saloon. I go every year. Not only to support friends Dave and Jody but to see the best paint on the newest customs on the planet. If you are a painter and you aren’t at this show…what are you even doing? This is a storied accolade, and if you want the award, you gotta get on the dias! I cannot even think of a better award as a custom motorcycle painter than being recognized by one or both of the Perewitz. The V-Twin Visionary show in town was also on Wednesday, and the vendors and bikes there were killer! If you haven’t attended a VTV event, you need to. Just follow on the “Gram,” and you’ll see that VTV is likely coming to a town near you soon!

Thursday was a first for me. Chris and I took part in the Hamster luncheon, and the police escorted ride from Spearfish. The Hamsters donate a ton of time and money to charity. In fact, this year in Sturgis alone, the Hamsters and their friends raised $528,000 for local children’s charities and Meals on Wheels too! So when you see those yellow shirts…tip your hats!

On Friday, I did my best version of the “Abilene Adios” [I’ll have to explain later] and dipped out of town pretty early for what was supposed to be a comfortable 36-hour ride back to Florida in the motorcoach. What I got instead was a 50-hour [plus] ride in the front seat of the motorcoach with no generator for air conditioning, radio, or any other creature comforts I had become accustomed to on the ride to Sturgis two weeks prior. Oh well…I guess the glamorous life of a magazine editor will have to wait!