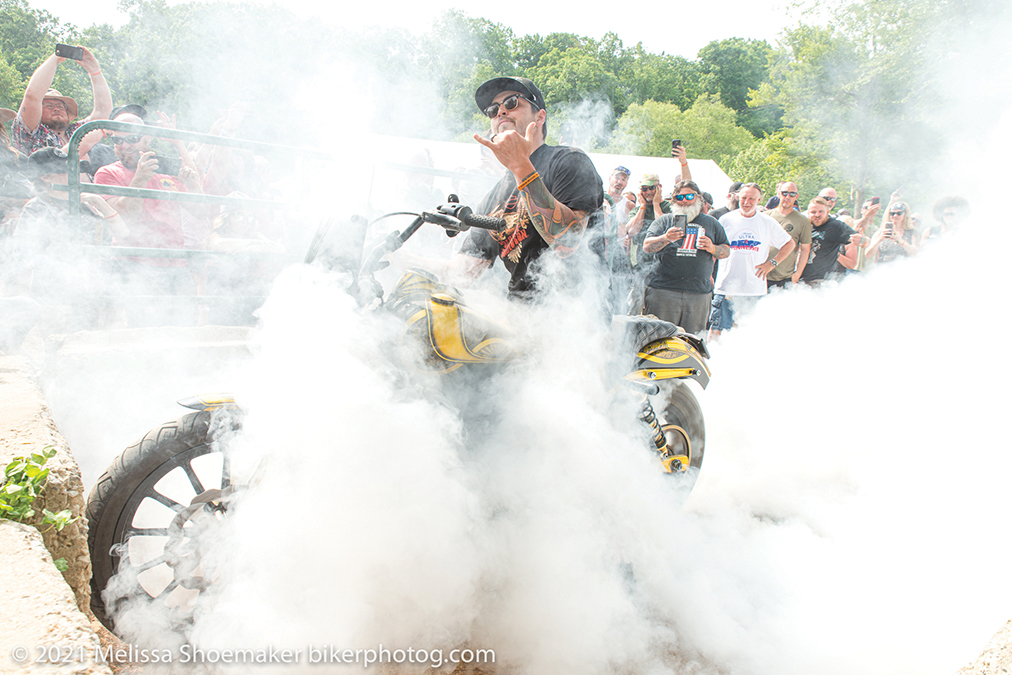 The Tennessee Motorcycle Music Revival returned to the Loretta Lynn Ranch in Hurricane Mills, TN for 2021. This time it was in the spring instead of the fall like it was in 2019. As usual it was quite an amazing event. It offered the enthusiast everything from bad ass old school choppers to some of the best performance V-Twins.  In short you could say, they had it all. In the past, due to being based in Northern California, I have had to live vicariously through social media instead of having the opportunity to attend the rally. I was stoked to actually roll my motorcycle onto these hallowed grounds. What many don’t know, is that Loretta Lynn’s Ranch is a mecca for motorcyclists. Ms. Lynn’s motocross invitational has done so much more than we could ever measure for our motorcycle industry by fostering growth from a young age for many of those of us that started on a dirt bike and then moved to the street.

Jeff G Holt is the “V-Twin Visionary”.  His performance bike show series is making its way around the country and is considered by many to be the premier performance motorcycle show.  There are many events happening on the ranch property during TMMR. There is Bill Dodge’s “BC Moto” builder’s invitational.  Nightly concerts, flat track races and plenty of opportunity to reconnect with the friends that we all seem to make in this industry whom we do not live near. There is also opportunity to make new friends too.

This year TMMR added the V-Twin Visionary Performance Series to its list of activities.  Bikes and builders from all across the nation converged at the ranch for the VTV show presented by Harley-Davidson. The VTV Performance Show was set up right in front of the big Harley-Davidson truck and trailer. It was impressive to say the least, to see how impressed the bar and shield guys were with the level at which builders have taken their bikes. From the killer front-end upgrades to carbon fiber body parts and engine upgrades, it was obvious these bikes were some of the finest in the country. There were vendors too.  Letric Lighting was onsite, as was Denton Performance, Boosted Brad’s Death Metal Racing and Rad Flagz.  The VTV show was on Saturday but over the course of the four-day event there was so much to see and so much to do it was almost overwhelming and there was always something fun happening.

I agreed to cover the event for TORQUE Magazine, which is why you are reading this article now. 2021 has been a very busy year for Team Dream Rides. We opened our Maryville, Tennessee location this spring so this was my first experience with a Tennessee motorcycle event except for our open house (which was one week prior to TMMR). Since I am from California and only recently moved to Tennessee, I have to be honest I was not expecting much. I am used to west coast shows like Born Free and the FXR’s of California shows. I could not have been more wrong!  TMMR was packed and it definitely had a much different feel to it. Tennessee is very relaxed. The people may have been chill, but the bikes definitely weren’t! The level of craftsmanship and innovation I witnessed at TMMR was every bit as impressive as the high-profile west coast shows.

The setting on the Buffalo River has plenty of shade. The beauty of this setting cannot be put into words. If you ever get the chance to go to the Tennessee Motorcycle Music Revival, I would strongly recommend you go.  I will definitely be there in 2022, I hope to see you there too!