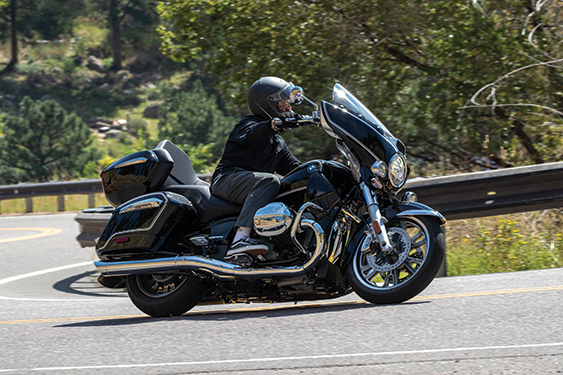 The R18B & Trans Continental Models They are Calling Soulful Bikes

See The Whole Story On The Torque Performance Web Site

Sturgis 2021 was an event that changed the way I forever view the events that I have attended for decades.  The first issue of TORQUE Magazine was launched, we hosted our first performance show, and I found out that BMW was entering the V-Twin Bagger market. I caught a glimpse of the new bagger models from a distance, and I was instantly drawn to them. BMW has a stellar reputation for performance motorcycles. Their dual-purpose bike is lauded by those that ride them, and the BMW S1000RR is one of the world’s fastest production motorcycles with a top speed of 188mph in stock form. I was certain that if BMW Motorrad had decided to enter the bagger market, they hadn’t come to play…this was serious business!

I stopped by the BMW Motorrad display and was instantly greeted by a fellow named Oleg. I was eager to ask questions, and Oleg was eager to oblige with answers.  Almost immediately, I offered to ride one home to Florida. Oleg couldn’t make that happen, but he offered to allow me to attend the upcoming press ride in Denver a few weeks after Sturgis, so that would have to do.

Immediately upon first inspection, I was impressed. Even though the R18 bagger models (two of them) are newly engineered and designed, they were very “BMW-esque.” Their boxer engine and shaft-driven driveline were in place just as I expected they would be.  BMW engines, particularly the “boxer” type engines, are a signature of BMW motorcycles, for good reason. The opposed-twin engines are very balanced by nature.  Their cylinder design lends itself to an amazing ability to cool itself. It also makes for an interesting overall look. I later found out that this engine design also provides ample torque for a smooth ride, but we will get into that in a minute.

I would like to point out that BMW went to great lengths to attract potential new customers without sacrificing the mechanical advantages that BMW is most known for. One example is the nickel-plated driveshaft. BMW cruisers have always been shaft-driven. Rather than compromise and install a belt drive, they elected to accentuate the driveline by making it stand out. Nickel is a warm plated finish and really adds panache to an otherwise mundane but necessary part of the driveline.  The paint is elegant, as are the body lines. It is clear that BMW designers and engineers spent ample time studying what types of aesthetics riders in the States are most inclined towards. Europe offers very different riding opportunities, and European riders have very different riding habits. Since the R18 Transcontinental and R18 Bagger (as it is called)  were intended primarily for the U.S. market, it was very important that designers hit the mark with a bike that fits into U.S. consumers’ expectations both mechanically as well as visually.

Once I arrived in Denver and the rider meeting and press briefings were over, the riding that we all came for began. The guided tour of 35 members of the press, dealers, and other notable BMW dignitaries was broken into two large groups. Each group was then broken down into smaller cohorts of four riders plus a BMW factory guide for a day-long ride through the mountains of Colorado. The bikes we rode were actual production models prepped and ready for dealers.

My group was to ride the Transcontinental model (full dresser) first. Then we would switch at lunch to ride the Bagger models, which fit right in line with a Harley Street Glide to finish the day.

Right out of the gate, the R18 was impressive both aesthetically and mechanically. I had anticipated that I would feel like I was riding a luxury sport machine. The R18 did not disappoint one bit. The first thing I noticed with the engine was the TORQUE. The boxer engine did not waste a single revolution. It didn’t bark [or bite]. There was zero ancillary or unwanted engine chatter even later in the day once the engine was red hot from riding through the mountains of Boulder, Golden, and Estes Park.  The powerband was very different from the baggers I am accustomed to. While I never felt like the front wheel would, or could, come off the ground, there was ample (not too much/not too little) TORQUE throughout the entire powerband. The engine never once detonated, and never once did I feel there was not enough power to pass on the freeway or the surface streets without downshifting to do so. I would characterize the engine operation as strong, steadfast, and engaging no matter the speed of the motorcycle or the engine’s RPM. Overall, the engine performed precisely as I expected it would.

Seat wise the riding position was right in the middle of the pack. I think every single motorcycle in the world deserves a seat that “fits” the rider and the motorcycle. However, for a stock saddle, BMW did a fair job. Honestly, if I were to be critical at all, I’d prefer some sort of leather/Alcontara seat with a firm foam and gel pad combination. Still, honestly, there is little room for overall improvement. I am sure there will be aftermarket solutions right around the corner once the R18 models hit the streets in the marketplace. The instrumentation and audio systems were exactly what I expected to find on a motorcycle from BMW. With near perfect placement, BMW engineers hit the controls out of the park. The push-button main power and touchscreen audio systems are functional and fit the current expectations of buyers today.  Foot placement was relaxing and allowed for the rider to move around just enough to not feel stifled. My only complaint here was the height of the toe-shifter, but if one was so inclined (and possessed a small hand tool), the shifter could be adjusted in a dozen different positions to suit the rider’s foot height and shoe size.

Overall, between the travel, the accommodations, and the experience of riding new motorcycles from a company that has such a rich history of performance and innovation, I’d say we are on to something. As I briefly mentioned previously, I am slated to ride one of the R18 touring models for an extended test ride very soon. I can only imagine that I will grow more fond of this bike once I get some serious miles on it! My advice: if you are pondering a new motorcycle like one you’ve never ridden or seen before…check out a BMW dealer near you…I think you’ll be surprised.