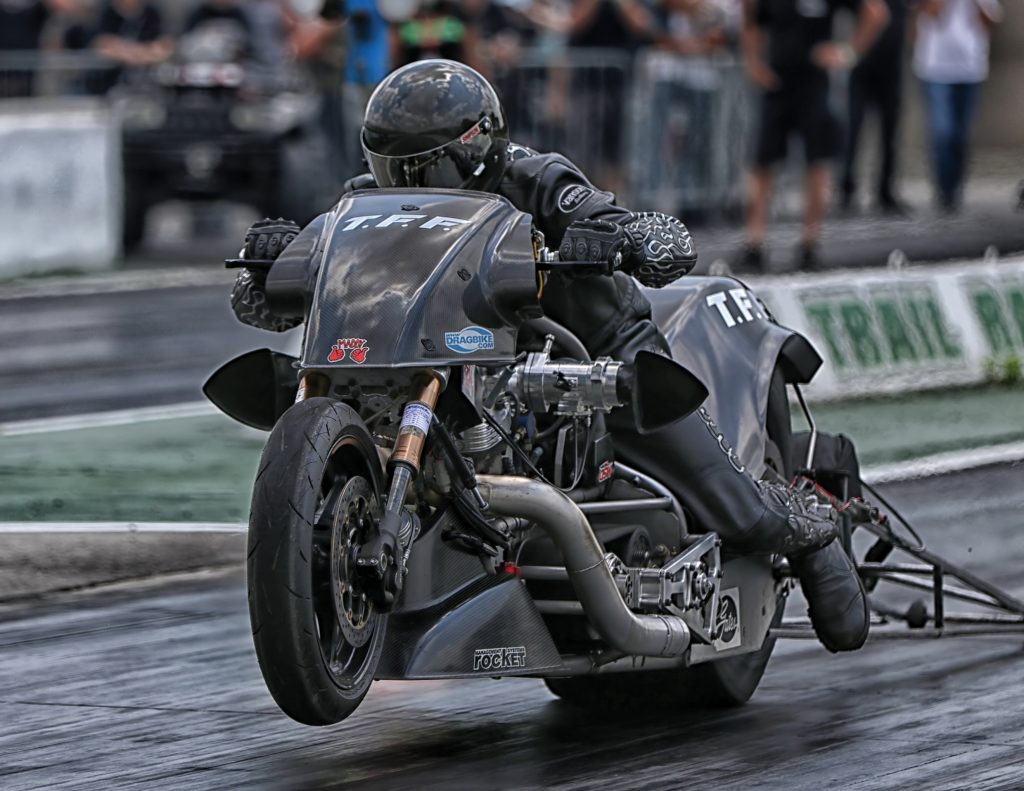 Torque Gets You Up To Date On AHDRA Action

Read The Whole Article On The Torque Mag USA Website

Ryan Peery has found his sweet spot, winning his third AHDRA all-American motorcycle drag race in as many events while in his home state is sweet indeed. That’s what the Milford, Ohio, based Top Fuel Harley racer did this past weekend at National Trail Raceway, as the AHDRA brought its nitro and gas V-Twin roadshow to the facility just east of Columbus. The pressure was enough that Peery let the number one qualifier slip away to Cecil County winner Tracy Kile. Tracy posted a 6.54 at 220, while Ryan clocked in at number two with a 6.64 at 212. The two met in the finals. Kile kept it planted while the usually consistent Rich Vreeland blew the tire off in their semifinal pairing.

Atlanta winner Michael Balch picked up his second Hawaya Racing Nitro Funnybike win, beating Peery’s “Big Nasty” in the final with Buddy Johnson at the controls. Number one qualifier Balch took the tree .084 to .204 in the final and motored to a 7.0 for the win.

Peery may have three wins to his credit this year and Balch two, but Preston Bartlett has won all four Hawaya Racing Pro Fuel races this season. Your number one qualifier, Sam White, snatched the honor with a 7.35. Preston raced past Jim Martin, whose bike has suddenly developed a habit of moving to the right. Bartlett took the final at the very start. His .105 light to White’s .142 was enough for his 7.522 to take the win against Sam’s quicker-but-losing 7.490.

AHDRA champion Mike Motto qualified number one in GMS Racing Pro Open, but his crankshaft broke on his way to the staging lanes for the first round of eliminations. This meant that the class boiled down to Paul Vicory and Gary Burkley in the final. Vicory’s turbocharged Bagger ran its quickest and fastest lap of the day (9.45 at 156 mph) for the win.

Cecil County Zippers Performance Pro Modified winner Shane Pendergrast took the stripe at National Trail. Pendergrast qualified number one and raced John Price in the final. Price took the tree by .005, but Pendergrast’s 8.70 drove around Price’s 8.82 for the win.

Rockingham Pro Modified winner 71-year-old Gary Douglass won the Pingel Modified this time around. The weekend was a tough one—rain on Saturday and two rounds of qualifying and eliminations on Sunday. It was hot, and the air was far from optimal. The win light came on just in time for Douglass, whose bike clocked out for the day immediately after crossing the stripe.

Law Tigers Pro Bagger winner David Miller’s 103 cubic inch engine is a collection of spare and leftover parts that David and his friend Brad had laying around—JE pistons, H-D cams, and most importantly, the NOS fogger set-up squeezed between the cylinders. Number one qualifier Rylan Mason ran 9.94 at 139.83 mph. Mason was also quick at the tree in the final against Miller, with a .056 to David’s .389 light. Mason had slowed to the 11s in eliminations while Miller was steady in the 10-tens, which was good enough for a 10.16 to 11.51 win for David.

At 63, John Shotts is still young enough to take on a new challenge. The 2020 AHDRA 9.70 Super Gas champion found a way to take an extra 4/10ths off his Destroyer’s ET and try 9.30 for the first time and win. Runner-up Dave Doremus qualified number one and took the tree .090 to .114 in the final. Still, Shotts stayed closer to the index for the win as everyone was slowing down in the heat of the day.

Brad Reiss Jr’s .058 advantage at the tree allowed him to take the stripe with a 9.98 to John Shotts’ 9.96. Reiss won this weekend on his 84 cubic inch Sportster-based engine with nitrous and Buell bodywork adapted to the owner-built chassis. Crosby Blair was number the one qualifier.

Crosby Blair also qualified number one in the 10.90 index and carried that honor for the win this time around. Runner-up Clayton Danford took the tree .069 to Blair’s .098, but Crosby ran closer to the index with an 11.18 to Danford’s 11.27.

Nate Carnahan was another racer scoring a third straight win, taking the 10.30 index final over Reiss Jr. Carnahan put .079 on Reiss at the tree, pushing Brad to breakout. Gary DeZee qualified number one.

Kevin Winters froze Loren Potter at the tree by .103 in the all-Buell [11.50 index] final. Winter put up an 11.52 while Loren broke out with an 11.43. Number one qualifier Charlie Walker lost to Winters in round two

Cody Rozeski took the Mad Monkey Motorsports Eliminator win, taking the tree by .026 over final round opponent Robert Willis and running an 11.551 on his 11.50 dial-in. Willis ran 9.705 against his 9.68 dial.

Victor Gotay had some transmission issues, so his team switched focus to T-Man Performance Bagger Eliminator. That’s where Gotay was able to take a win against his teammate Crystal Lynch. Victor put .120 on Crystal at the tree and ran 10.22 on a 10.20 dial, while Crystal broke out with a 10.84 against a 10.90.

Bill Rowe, his family, and the AHDRA community look forward to recovering from several hot weekends of racing before returning to action at Sturgis Dragway on August 8-10.