To Willie… The G 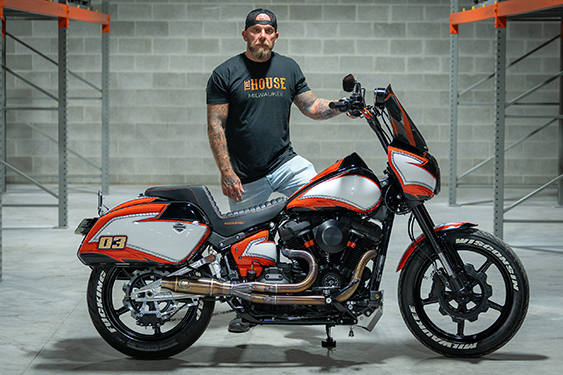 When Tommy Donnelly from House of Harley set out to build his Harley Lowrider S known as “The G,” he had a vision.

Tommy’s original vision started out with paying tribute to the iconic Harley designer “Willie G” by way of a portrait that was to be done on a helmet. His idea eventually morphed into a tribute that included the complete motorcycle. Tommy initially bounced the idea off of his old friend from Texas, Jace from Fast Life Garage.

Tommy’s story begins in 2004 when he left New York City and quickly found himself in the sales department of a local Harley-Davidson dealership. After a bit, he decided that he would start taking “working vacations”  all over the country. He filled positions at shows for other dealerships while hustling and continuing to push forward, building a career in the industry and making himself known in the dealership community. It wasn’t long before people started taking notice. Eventually, he was approached by a representative from Harley-Davidson, and he was offered a full-time job with House of Harley.

Always one to grab life by the balls, Tommy accepted the one-year offer. Within three months, he became the new general manager. With a new team, more resources, and fire in his eyes, he scooped up his Softail Low Rider “S” and, in 2020, began planning and building our feature bike coined “The G.”

If you have kept up with the King of Baggers, you know about Eric Stall’s trailer fire (which totaled his race bike and all his race equipment). Tommy and his team at House of Harley came to the rescue and got Eric back on his feet and ready to race in four very long days. In the midst of that, Tommy’s interest was piqued when he saw the Team Saddlemen race bike. This bike influenced his choice of colors. Once again, he was on the phone collaborating with Jace and putting pen to paper on what he wanted for his paint scheme. Tommy knew that overall he wanted a race bike feel.  He was also looking for a significant number set to run somewhere on the bike.  Eventually, he chose the “03“, throwing a nod at the “1903” origin of the Motor company. While most of the creative control was charged to Jace, there was one exception: Tommy wanted them to leave a blank spot somewhere on the bike in hopes that he could get Willie G himself to sign and endorse the bike.

At this point, Donnelly enlisted the help of his close friend (and Service Manager) Harper Hemenway to become the lead on his assembly team. Most things went smoothly in the assembly process. However, one of Harper’s major hiccups was adapting the generation-two Trac Dynamics swing arm to a PM caliper. Trac doesn’t make a bracket to adapt and mount the PM Caliper, and since ABS wheel spacers don’t exactly machine well, Harper and his team summoned the talents of Justin Page (www.mymachinistdesigns.com) to work out the kinks and get them tracking in the right direction.

Jay VanNocker handled the engine build, and Tommy dealt with the style and assembly plan.

The parts list on this bike is impressive:  Speed Merchant Original Garage Moto, Saddlemen Seats, and of course, Lyndall brakes. There were also multiple products supplied by Drag Specialties.

The bike was completed in March of 2021. The original plan was to have the motorcycle finished for the performance bike shows at Daytona Bike Week, but unfortunately, things just didn’t fall into place. They ended up unveiling The “G” at TMMR’s (www.motorcyclesandmusic.com) V-Twin Visionary (www.vtwinvisionary.com) show. If you haven’t seen this bike in person, you need to. Pictures just don’t do it justice, so do yourself a favor and plan on making it to a show near you and check this thing out! You won’t be disappointed!